Grocery Executive of the Year: Apoorva Mehta, CEO of Instacart

In the wake of the Amazon-Whole Foods deal, Instacart signed on with dozens of retailers, turning what many thought would be a disadvantage into a major advantage for the company. 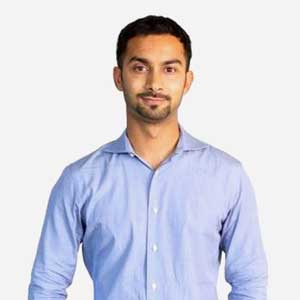 The [Whole Foods] acquisition was a wake-up call to all grocers that having an e-commerce strategy is critical and we knew that would be an incredible opportunity for us.

Under CEO Apoorva Mehta’s leadership, Instacart turned what many considered a damaging blow — Amazon's $13.7 billion acquisition of Whole Foods — into a major opportunity for the company. Rather than dwell on the threat the e-tailer posed, Instacart focused on partnering with dozens of grocers who were eager to add online shopping in the wake of the deal.

The e-commerce provider moved at an eye-popping pace, expanding from 30 markets at the beginning of 2017 to over 150 today, putting it firmly on track to reach its goal of reaching 80% of U.S. households by 2018.

"We learned quickly that Instacart will work anywhere there is a grocery store, and that the convenience of same-day delivery is valued across the nation whether you are in a crowded city or suburb," Mehta wrote in an email to Food Dive.

The service’s rapid expansion has proven to naysayers the company is strong enough to compete with Amazon and other big players in the industry. Speed, agility and vision have vaulted the company ahead of smaller upstarts that are trying to muscle their way into the market.

"Expanding a service like ours is not easy," Instacart said in a statement earlier this year. "We’ve spent the last few years expanding judiciously and staying laser-focused on the efficiency and economics of our business model —  to make sure that it could someday support a national service."

It’s this laser-like focus that enables Instacart to stay ahead of the competitive curve.

"Instacart has flourished by focusing on a specific, albeit massive, industry segment — grocery — rather than trying to be all things to all retailers," Keith Anderson, executive vice president of strategy & insights for e-commerce analytics firm Profitero, told Food Dive. "It’s offering solutions for two of the most complex requirements of online grocery: a slick, mobile-ready ordering interface, and last-mile logistics," said Anderson.

Instacart has "done well to align its interests with retailers, offering them an actionable and pre-emptive way to respond to Amazon’s growth," continued Anderson.

Whole Foods, which was an early investor in Instacart, remains the company's largest account even after the Amazon deal. Many believe the end of this relationship is inevitable, but Mehta maintains Instacart will be fine without it. Among the big names signing on with Instacart in recent months: Publix, Stop & Shop, Wegmans and Aldi.

"Whole Foods continues to be a valued partner, but it accounts for just 2% of the grocery industry," Mehta wrote. "The acquisition was a wake-up call to all grocers that having an e-commerce strategy is critical and we knew that would be an incredible opportunity for us. In the wake of that announcement, we’ve launched or expanded many key partnerships and continue to have strong momentum with many top grocers."

The company recently made its first international expansion with Canada’s leading grocer, Loblaws. Then just last month, Instacart signed its biggest deal of the year — an agreement with Albertsons to provide online ordering and delivery for more than 1,800 stores. Some analysts warn that Instacart could be spreading itself too thin, though the company's ability to scale quickly has been proven time and again.

Despite its many gains this year, the company isn’t without its share of challenges, like finding and holding onto shift workers. Mehta indicated the company recently noticed that acquiring shoppers — people who pick and deliver Instacart orders — had become a challenge. His team has made some adjustments to improve efficiency, including a "touchless onboarding" process that allows prospective shoppers to apply, verify their identity and start shopping for Instacart in a matter of hours.

"The updated process makes it easier for people to start earning income as an Instacart shopper and helps us make sure we have enough shoppers to meet demand across the nation," said Mehta.

When asked how he has helped Instacart get to where it is today, Mehta replied, "Discipline. As the founder and CEO of a startup, I have to make hard decisions between battling priorities. I have to say no to lots of seemingly good ideas so that we can focus on what is critical now. The only way we are able to do this is by staying disciplined and consistently focusing on the long-term mission of the company."

It will be interesting to see if Instacart meets — or exceeds — its goal of reaching four fifths of the nation's households by the end of 2018, and if there is anything that can stop its rapid growth.