On the heels of two technology acquisitions, a deeper move into digital ads and fulfillment-as-a-service, analysts weigh in on what the e-commerce company is building.

After going more than three years without an acquisition, Instacart finally broke the streak earlier this month when it announced it had bought catering software company Foodstorm. Less than two weeks later, it made another splash, announcing that it had acquired smart-cart maker Caper for $350 million.

Two quickfire acquisitions underscore Instacart's drive to evolve in a rapidly changing industry. As retailers seek greater ownership of e-commerce sales and competitors like DoorDash gain ground, the company is moving beyond its legacy model of building websites and sending workers into stores to pick and delivery online orders. In addition to the technology acquisitions, Instacart is investing in digital advertising and automated dark stores as it eyes an eventual public offering.

Instacart needs to change up its strategy, industry experts say, but they're so far questioning what that long-term strategy might be. With the Caper acquisition, analysts spotlighted the data the checkout technology can provide, particularly on consumer behavior, as likely the most attractive part of the company to Instacart.

“This is a data war. He or she who has the data wins," said Ken Morris, managing partner at Cambridge Retail Advisors.

But they weren’t able to agree on how Instacart will use Caper going forward, especially its smart carts, or what's next as the e-commerce company doubles down on labeling itself a "retail enablement platform."

Instacart is positioning the Caper acquisition as its first major move inside stores. Along with marrying offline and online commerce, the checkout-free solutions will make shopping faster for consumers and its gig workers, and unlock more personalized shopping experiences and product discovery, the company said.

Analysts said Caper's technology sets Instacart up to gather greater insight into the dynamics of grocery shopping, with information on what shoppers browse, the order they put things in their carts, how many items get added and what’s placed in the carts but not bought. The data will likely bolster its knowledge of shopper behavior and give greater leverage to its digital ads business, they said.

“Instacart is betting on the scaling and rollout of the Caper Carts” in order to amass enough data, Mezzenga said.

But the company is up against several obstacles. Given the high cost of smart carts, grocers likely won't be inclined to use them unless Instacart makes the Caper Cart available at a low or no cost, analysts noted. Meanwhile, collecting more data — a benefit for Instacart — could put it at further odds with retailers, they noted.

“I think there will be even more of that reluctance with Instacart, because Instacart isn't just a pure technology company,” said Neil Saunders, managing director with GlobalData Retail. “It obviously is a company that has an interest in retail and potentially wants to get into retail itself at some point.”

Concern over control of shopper data, though, varies by the size of retailers, said Rick Watson, CEO and founder of RMW Commerce Consulting, with larger ones more likely to view Instacart as a threat, while smaller grocers may have a more positive perspective for the access to services and resources it provides that they otherwise couldn’t get.

Instacart said it plans to integrate Caper’s technology into its app and the e-commerce sites of its retailers, where its partners have access to the “vast majority” of their customer data, based on customer opt-in rates.

While Instacart says the smart carts can streamline shopping for consumers and make it easier for Instacart workers to fulfill orders, the analysts questioned why Instacart wouldn’t turn to a simpler checkout-free solution like mobile scan-and-go.

“I don't think that there's a long enough duration for this human in-store gig worker picking to justify the expense of the acquisition of Caper," Mezzenga said. "I think that that's a short-term solution.”

Watson said that Instacart workers might find the carts handy to help navigate stores and bypass checkout. But customers could run into issues, like where to put their children — the current model doesn't have a seat for kids — and what happens if a shopper damages the cart's cameras or sensor equipment.

“I don't see it as something that 80% of shoppers are going to use,” Watson said.

Instacart’s recent acquisition points to the growing array of services and features it can offer to retailers, becoming a one-stop-shop for technology, Mezzenga said — a view shared by Saunders and Watson, as well.

“I think that what Instacart is doing is saying, ‘We know that this relationship [with grocers] is going to continue to get pretty contentious. How do we continue to position ourselves as: We’re white-label. We’re trying to help you solve problems,” she said.

While Mezzenga said she used to view Instacart as being on a mission to become a retailer with dark stores, she now wonders how feasible that would be given its reliance on retailers.

“Based on their current hires from, many from Facebook, I think that for them it seems as though the best revenue-driving investment in the near and potentially long term is investing in the media network” and generating more revenue from CPGs, she said.

This summer, Instacart made two high-profile hires from the social media giant. CEO Fidji Simo previously oversaw development and strategy for the Facebook app, while President Carolyn Everson was formerly vice president of global marketing solutions at Facebook. Chief Operating Officer Asha Sharma, who joined the company in February, was a vice president at Facebook for the company's product and Messenger divisions.

Watson also thinks Instacart will stick with its focus as a retail enablement platform and views the Caper and FoodStorm moves as ways for the company to add more services like it did with its acquisition of Unata in 2018.

“The big thing for Instacart is to prove that they have an actual strategy and be an integrated service provider for these retailers that actually works and is reliable,” Watson said.

Saunders said the Caper acquisition creates different revenue streams for Instacart, noting that selling or licensing Caper's technology could be a profitable endeavor.

“I think Instacart looks to Ocado and sees how Ocado has become a company that really helps retailers and licenses out technology," Saunders said, adding he believes Instacart wants to do something similar. That could be smart, given Instacart's model is replicable by retailers, who can roll out their own delivery and pickup solutions, he said.

The question still remains if Instacart will change its tune a few years from now, Saunders said. “[More data] makes Instacart potentially a very big threat,” Saunders said. However, the risk of alienating its retail partners if it becomes a competitor means Instacart would need to go all-in if it chooses that route, the analysts noted.

Morris sees Instacart gearing up to take out retailers on the road to becoming one itself. “This is the Trojan Horse to these retailers," Morris said. "They're going to come in. They’re going to own the customer, and then they're going to compete, I believe, and I think it's going to be very similar to Amazon."

Most grocers don't know much about shoppers unless they are signed up for the loyalty program, creating an opportunity for Instacart to gain more valuable data it can then leverage to compete, Morris said. The new in-store presence with Caper coupled with its plans to offer automated fulfillment service with Fabric position Instacart to use its increasing knowledge of consumer behavior for its own retail services, he said.

Instacart said it is focused on supporting its partners and does not plan to become a retailer itself, noting that the Caper acquisition is another tool in its technology toolkit for its partners. ("What we’re focused on is really being the best partner to all retailers," Simo said in a recent interview with The Associated Press.)

What's the next big move?

With the industry worried about the long-term profitability of online groceries, Saunders said Instacart should double down on its automated fulfillment efforts.

“This is a very big growth area and it is super smart, because it's solving a very genuine problem that exists,” Saunders said.

Instacart can use MFCs to deepen its role in grocery, like expanding its direct-to-consumer offerings, selling emerging brands or rolling out exclusive products, without becoming a direct competitor to its retail partners, Watson said, pointing to its growing partnerships with digital brands on its marketplace, like ButcherBox and Sunbasket.

“The big thing for Instacart is to prove that they have an actual strategy and be an integrated service provider for these retailers that actually works and is reliable.”

Watson said Instacart might want to look into offering a white-label curbside solution. It could also continue building up its Ads business, he noted — a point Saunders and Mezzenga agreed with.

Last spring, Instacart launched a self-serve advertising platform that lets brands promote products in search results, choose the products they want to promote, set a budget and pay when users engage with those products. The company's biggest hires this year — Simo and Everson — both have substantial advertising experience. When it announced the hiring of Everson, Instacart noted she played a “pivotal role” in turning Facebook into the second-largest digital ads platform across the globe and also noted Instacart's advertising arm is poised to be one of the fastest-growing parts of the company in the year ahead as it aims to become one of the largest online grocery advertising platforms globally.

“I think — and a lot of my colleagues think the same way — that they’re going to make some kind of national grocery acquisition," Morris said, noting it makes sense for Instacart to have a physical presence, where it could, for instance, add MFCs for in-store theater. (Instacart said it has no plans to sell or merge.)

As Instacart beefs up its data collection, it might need to invest in computer processing and data management tools, Mezzenga said. To dive deeper with in-store automation, she said the company could explore shelf-scanning robots and electronic price tags.

Mezzenga could also see Instacart outsourcing its gig workers to retailers for jobs outside of e-commerce fulfillment, especially during the holiday season. That could give its workers more flexibility to pick shifts — like work for Instacart one day and for a grocer the next — while helping retailers with the labor shortage.

For its part, Instacart said helping to adopt and scale technologies for grocers will continue to be a key differentiator for the company as it continues to build out its suite of enterprise technology services. The company said it’s focused on an omnichannel approach, which includes breaking down the barriers between online and offline and offering a wide array of services for retailers to choose from.

Filed Under: Finances and Deals, Technology 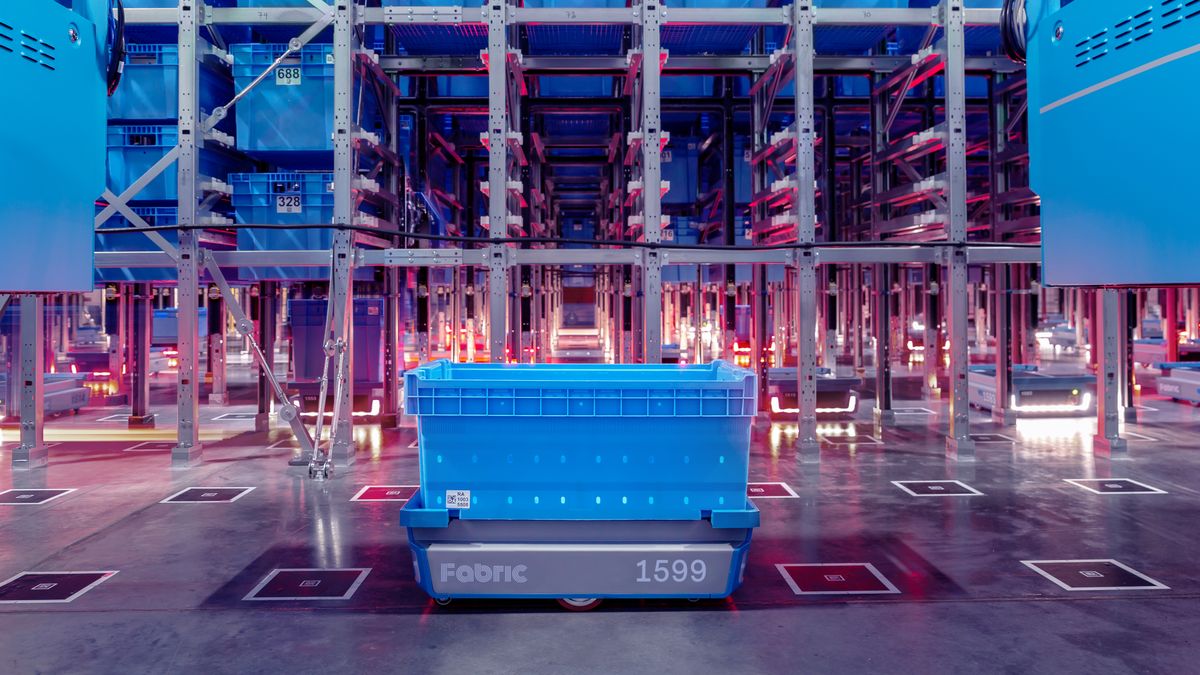 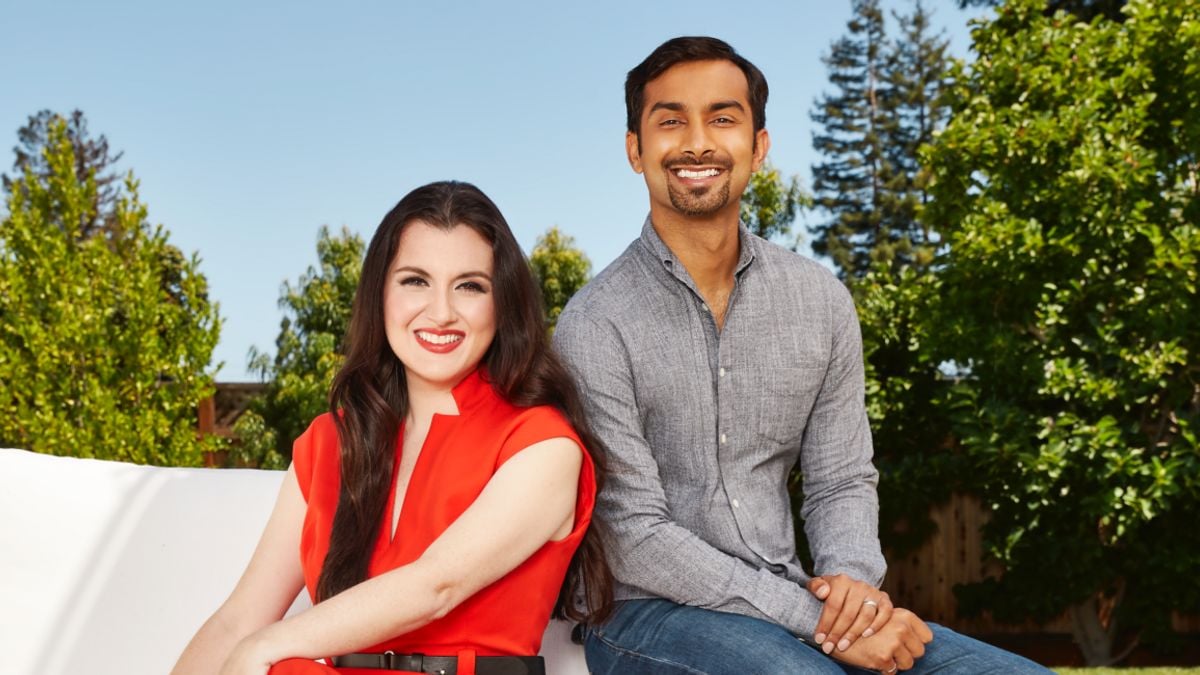 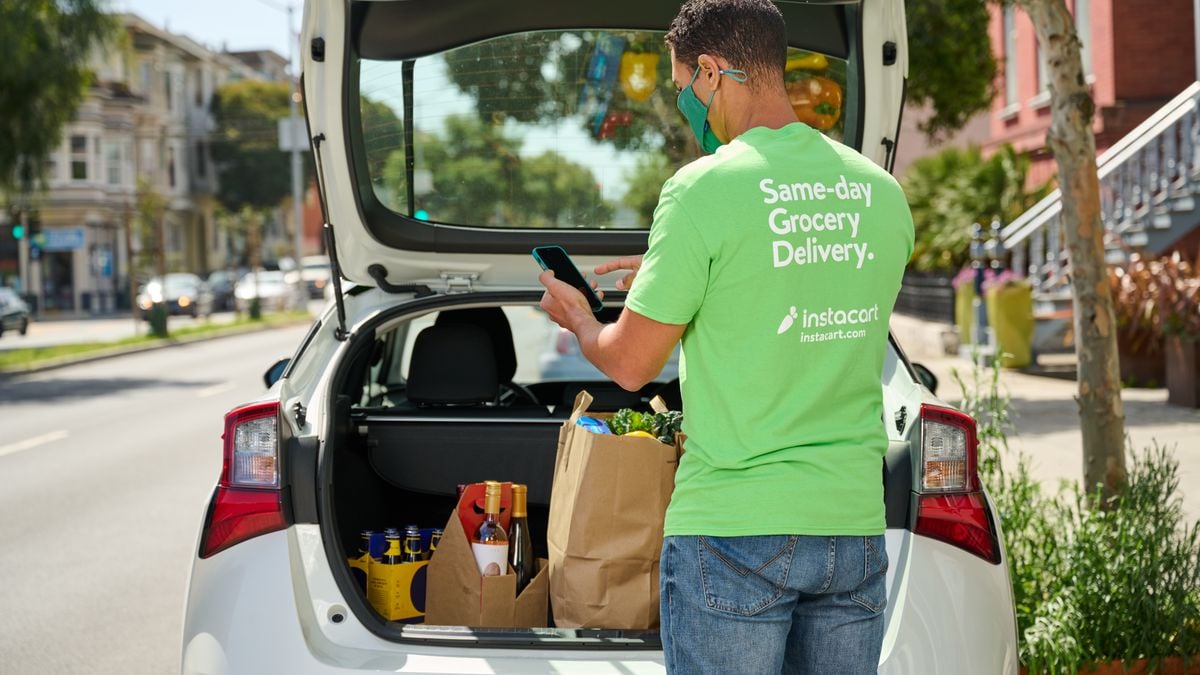 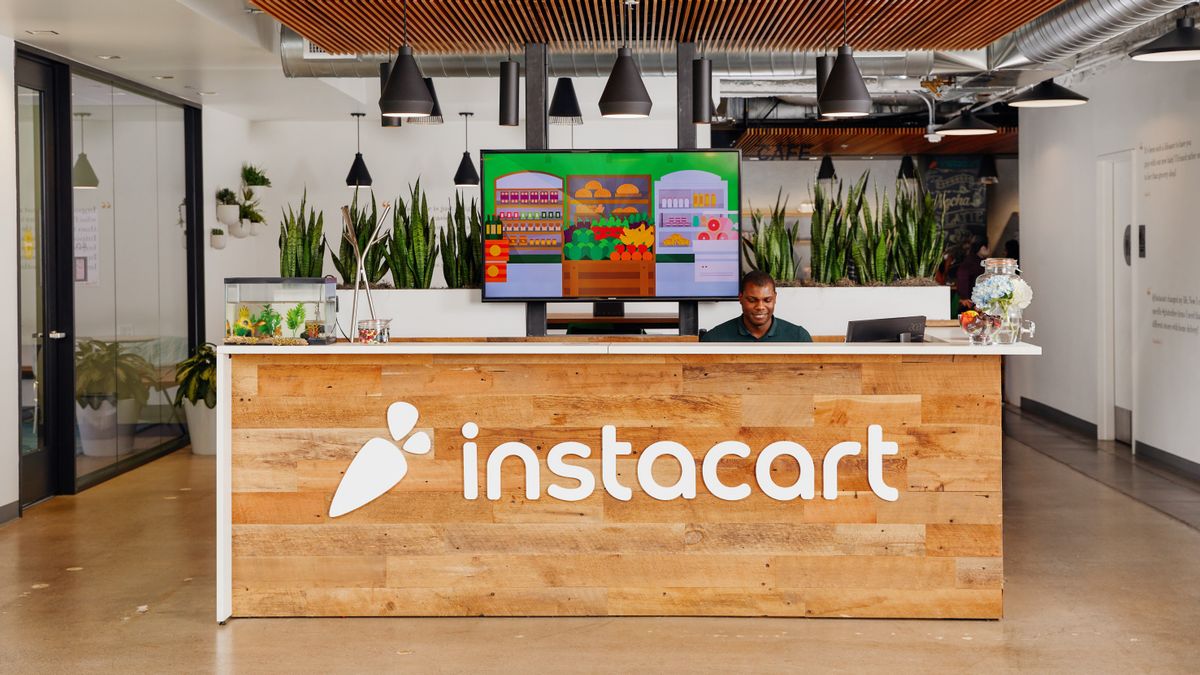 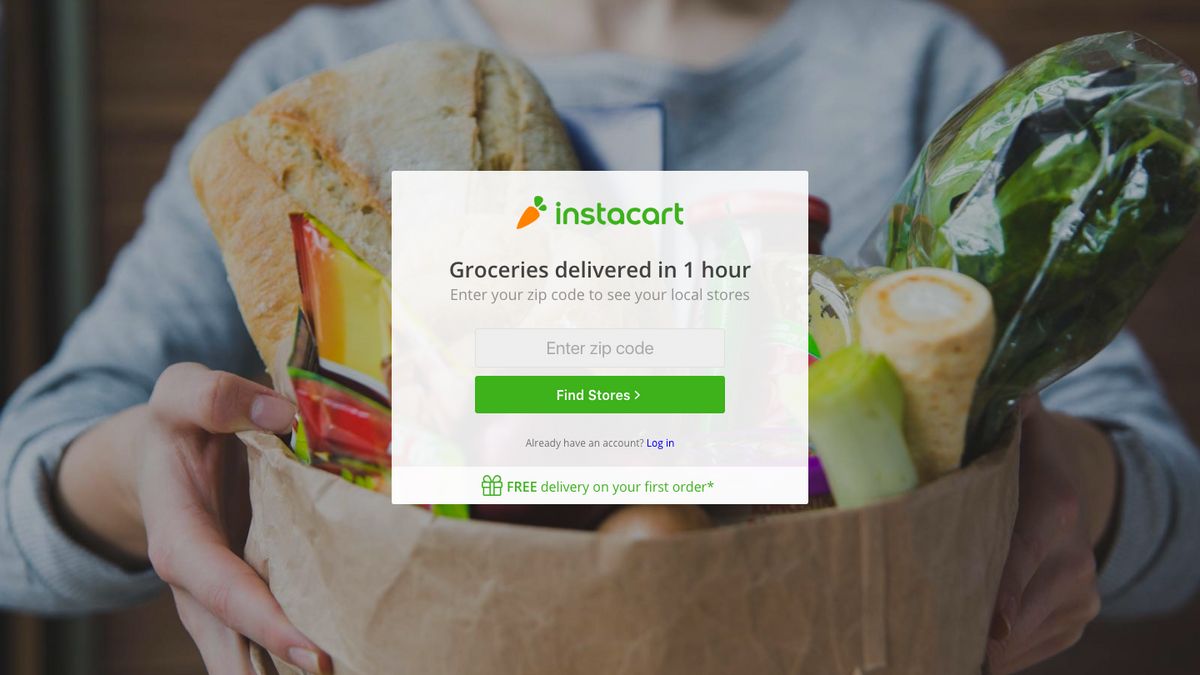 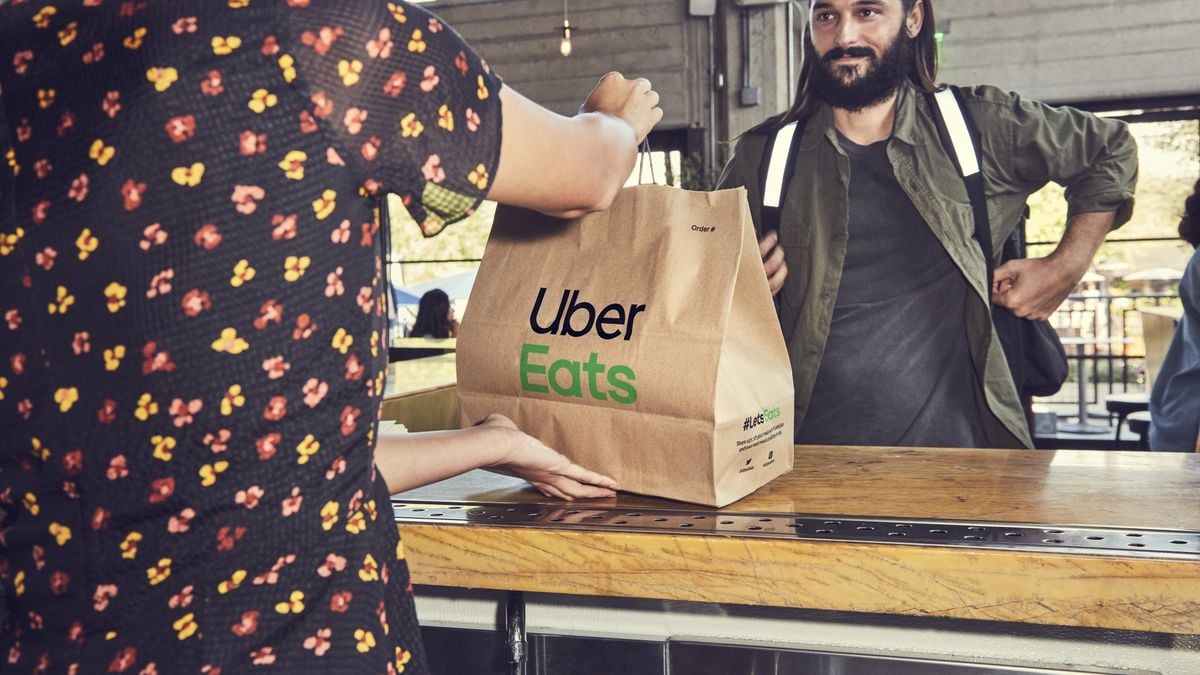 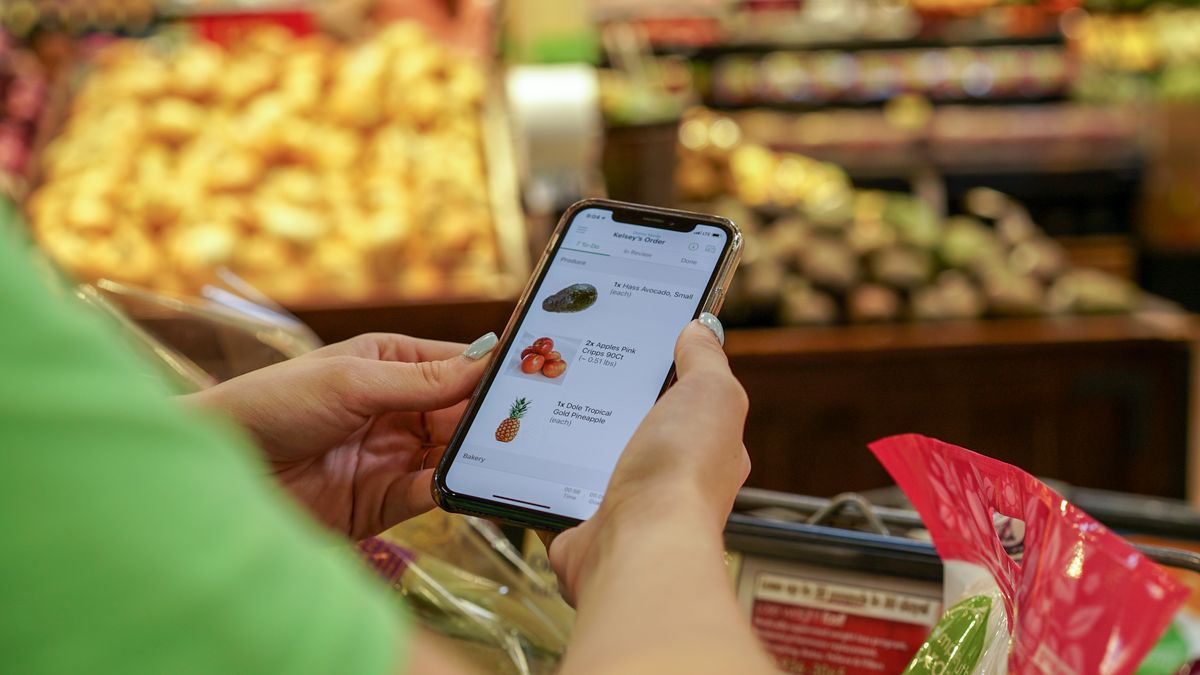 View all | Post a press release
Foodarom Takes Flavor Innovation to New Heights with its 2023 Flavor Trends
From Foodarom
Storewise And TRUNO’s Official Partnership Offers Enhanced Operational Control to Retailers
From Storewise
Revionics Reinvents Science Behind Retail Promotions with New Promo Tool
From Revionics
FLEXcon Launches the Next Generation of FLEXcon® PRISMcal® Prismatic Films
From FLEXcon Company, Inc.
Editors' picks
Latest in Finances and Deals
Industry Dive is an Informa business
© 2023 Industry Dive. All rights reserved. | View our other publications | Privacy policy | Terms of use | Take down policy.
Cookie Preferences / Do Not Sell